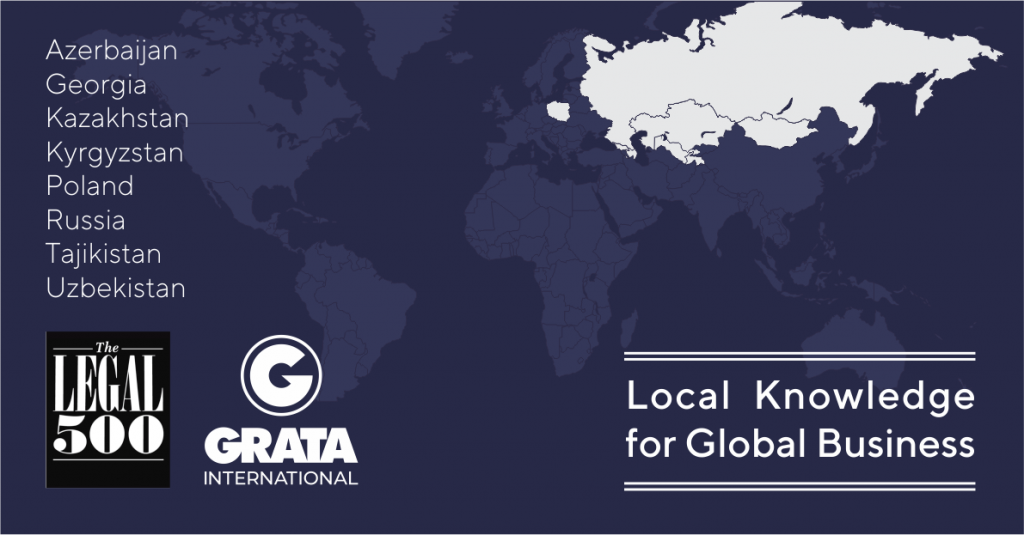 GRATA International made a vast improvement over its last year’s results and entered the rankings across 8 jurisdictions – Azerbaijan, Georgia, Kazakhstan, Kyrgyzstan, Poland, Russia, Tajikistan and Uzbekistan.

In Kazakhstan, GRATA International has reached Tier 1 position in the following practices:

In Energy and Natural Resources practice, GRATA reached the highest Tier and was commended for its full spectrum of matters, from oil&gas to mining and renewables. Almat Daumov and Baizhan Bekzhanov were acclaimed for their role in projects for Sinopec, Xingling Petroleum and Brendt.Maxim Burak, Energy and Natural resources partner in Astana, was praised as one of the leading Next Generation Lawyers in Kazakhstan.

Real Estate and Construction team, headed by Yerzhan Yessimkhanov, who was named as a Leading Individual, takes the top position in Tier 1 for the third consecutive year. Noting the team’s practical responses to legal questions posed and how quickly understands what the client needs, the researchers have praised the team for its projects in real estate development and EPC contacts in petrochemical industry.

For the second year in a row, GRATA’s Tax and Customs department dominated the rating with its position in Tier 1. The tax and customs lawyers were described as responsive and providing clear and complete analysis', underpinned by a deep knowledge of local legislation. Assel Ilyassova, head of the department, identified as a Leading Individual, was praised by clients for her 'good and quick communication', as well as 'her ability to create a good strategy during hearings'. Counsel Kanat Adilbekov was named as a key figure advising on both procedural matters and litigation.

In the rest of Kazakhstan’s practice areas GRATA International has secured Tier 2 positions:

Banking and finance team, headed by Shaimerden Chikanayev and Marina Kahiani, was praised for its success in Project Finance and PPP matters.

Described by clients as 'one of the strongest' and 'among the best in Kazakhstan', GRATA’s dispute resolution team was noted for its strengths in commercial and construction cases. Bakhyt Tukulov, head of the department, was described as a 'charismatic leader' leading a team of 'dedicated lawyers with a passion to for their work'.

The researchers have noted GRATA’s IP and TMT team of for its breadth of experience in intellectual property matters, ranging from trademark and copyright registrations to copyright infringement and trademark disputes. The team, headed by Saule Akhmetova, also include counsel Aizhan Mukhammad and senior associate Timur Berekmoinov, both of whom are qualified patent attorneys.

GRATA’s corporate team have risen to Tier 2. The department was recognised for its focus on large-scale M&A transactions and a strong record in the oil & gas industry.

In Azerbaijan, GRATA International has entered the rankings in Tier 3. The team in Baku, headed byUmmi Jalilova, has expanded considerably with four new arrivals and four promotions.

Kordzakhia Jgenti GP, associate office of GRATA International in Georgia, has improved their standings by reaching positions in Tier 2 for dispute resolution practice and Tier 3 for corporate, commercial and M&A. Sofia Roinishvili, who leads most matters, was praised for her 'deep knowledge of the peculiarities of corporate and commercial law', while her colleagues Irakli Kordzakhia and David Pataraia, were also recommended.

In Kyrgyzstan, GRATA International dominates the country’s rankings by taking Tier 1 position. The team in Bishkek, headed by Kanat Seidaliev, was commended for its impressive pool of international clients, which includes P&G, EBRD and Mastercard. On top of that the lawyers of GRATA in Bishkek have also prepared an assessment of the regulatory environment in Kyrgyzstan and reviewed existing capital markets laws, liaising with relevant local authorities to provide supporting documentation for regulatory reform. Nurlan Kyshtobaev, recognised as one of the Leading Individuals in the country, heads the banking and finance practice, with additional expertise in corporate and infrastructure-related matters. Elvira Maratova and Iskender Batyrbekov were named as Next Generation Lawyers.

In one of the most vibrant economies of Central Asia, in Uzbekistan, GRATA International has topped the country’s legal rankings by taking position in Tier 1. The team in Tashkent was praised for its 'good knowledge of the law' and close collaboration with international offices. Bakhodir Jabborov, managing partner and director of Uzbekistan office, was described as 'exceptional negotiator' with 'outstanding experience in all spheres of law' which placed him among the Leading Individuals in the country. Other partners of Tashkent team, Nodir Yuldashev and Atabek Sharipov were highly recommended for their projects in telecoms, construction, banking and finance.

In Tajikistan, GRATA International has kept its Tier 2 positions. According to the researchers and clients, GRATA International’s Dushanbe team handles matters ‘according to the highest international standards, using advanced practices’, and is known for its expertise in the banking and finance sector. Kamoliddin Mukhamedov, recognised as one of the Leading Individuals, has ‘a high level of professionalism, produces high-quality work in a timely manner and meets all client requirements.

For the first time, GSW Legal, associate office of GRATA International in Warsaw, has managed to enter the ranks of leading law firms in Poland and landed a position in Tier 5 in Commercial, corporate and M&A. GSW’s managing partners Rafał Szalc and Tomasz Grabarek were noted for their 'deep knowledge' in corporate issues affecting new technology companies. Legal 500 highlighted GSW’s advice to Digital Care on the establishment of a Polish subsidiary and on the drafting and negotiation of a cooperation agreement with a major Russian mobile telephone operator.

Associate offices of GRATA International in Russia have also enjoyed success by entering the ranking as leading firms in their practice area. Legal Studio secured a place Tier 3 in Commercial, corporate and M&A: St Petersburg. The team from St. Petersburg was noted for their work advising a European dairy producer on the acquisition of a domestic production company for €25m and assisting an Italian manufacturer with various corporate matters relating to its entrance into the Russian market. Key practitioners Vladimir Komarov, managing partner and director of the office, and Oleg Shevtsiv, partner, 'provide excellent support and know the commercial market very well'.

GRATA International Rostov-on-Don, was placed in Tier 2 in Transport practice and was identified as having one of the leading maritime transport practices in Russia. The team, headed by Inna Makarova, advises on vessel registration, ship arrest, shipping contracts and contentious issues. Among other matters, the firm assisted multiple crew members with resolving debt collection disputes with vessel owners.

GRATA International held an online conference: Contemporary issues in the field of protection of IP objects 21.11.2022